The attitude of mind necessary to a complete enjoyment of the tales
in this book must first spring from the realisation that, as stories,
they are as different from our own short imaginative fiction as the
town of Pescara, on the Adriatic Sea, is different from Marblehead in
Massachusetts. It is true that fundamentally the motives of creative
writing, at least in the Western Hemisphere, are practically everywhere
alike; they are what might be called the primary emotions, hatred and
envy, love and cruelty, lust, purity and courage. There are others,
but these are sufficient: and an analysis of The Downfall of Candia
together with any considerable story native to the United States would
disclose a similar genesis.

But men are not so much united by the deeper bonds of a common humanity
as they are separated by the superficial aspects and prejudices of
society. The New England town and Pescara, at heart very much the same,
are far apart in the overwhelming trivialities of civilisation, and
Signor D’Annunzio’s tales, read in a local state of being, might as
well have remained untranslated. But this difference, of course, lies
in the writer, not in his material; and Gabriele D’Annunzio is the
special and peculiar product of modern Italy.

No other country, no other history, would have given birth to a
genius made up of such contending and utterly opposed qualities: it
is exactly as if all the small principalities that were Italy before
the Risorgemento, all the amazing contradictions of stark heroics and
depraved nepotism, the fanaticism and black blood and superstition,
with the introspective and febrile weariness of a very old land, were
bound into D’Annunzio’s being.

Not only is this true of the country and of the man, the difference
noted, it particularly includes the writing itself. And exactly here is
the difficulty which, above all others, must be overcome if pleasure
is to result from “Tales of My Native Town.” These are not stories at
all, in the sense of an individual coherent action with the stirring
properties of a plot. The interest is not cunningly seized upon and
stimulated and baffled up to a satisfactory finale. The formula that
constitutes the base of practically every applauded story here—a
determination opposed to hopeless odds but invariably triumphant—is
not only missing from Tales of My Native Town, in the majority of cases
it is controverted. For the greater part man is the victim of inimical
powers, both within him and about; and fate, or rather circumstance, is
too heavy for the defiance of any individual.

What, actually, has happened is that D’Annunzio has not disentangled
these coherent fragments from the mass of life. He has not lifted his
tales into the crystallised isolation of a short story: they merge
from the beginning and beyond the end into the general confusion of
existence, they are moments, significantly tragic or humorous, selected
from the whole incomprehensible sweep of a vastly larger work, and
presented as naturally as possible. However, they are not without form,
in reality these tales are woven with an infinite delicacy, an art,
like all art, essentially artificial. But a definite interest in them,
the sense of their beauty, must rise from an intrinsic interest in the
greater affair of being. It is useless for anyone not impressed with
the beauty of sheer living as a spectacle to read “Tales of My Native
Town.”

The clear understanding of a divergence should result in a common
ground of departure, of sympathy, and to make this plainer still it
ought to be added that in the question of taste, of the latitude
of allowable material and treatment, the Italians are far more
comprehensive than ourselves. This, certainly, is particularly true in
their attitude toward the relation of the sexes; and here is, perhaps,
the greatest difference between what might be loosely called a Latin
literature and an Anglo-Saxon. We are almost exclusively interested
in the results, the reactions, of sexual contacts; but the former have
their gaze fixed keenly on the process itself. At the most we indicate
that consummations of passion have occurred, and then turn, with a
feeling of relief, to what we are convinced is the greater importance
of its consequences.

But not only is Gabriele D’Annunzio perfectly within his privilege in
lingering over any important, act of nature, he is equally at liberty
to develop all the smaller expressions of lust practically barred from
English or American pens. These, undeniably, have as large an influence
in one country, one man, as in another; they are—as small things are
apt to be—more powerful in the end than the greatest attributes. Yet
while we have agreed to ignore them, to discard them as ignoble and
obscene, in “Tales of My Native Town” erotic gestures and thoughts,
libidinous whispers, play their inevitable devastating part.

Yet this is not a book devoted to such impulses; one tale only,
although in many ways that is the best, has as its motive lust. It
is rather in the amazingly direct treatment of disease, of physical
abnormality, that it will be disturbing to the unprepared reader
from an entirely different and less admirable, or, at any rate, less
honest, convention. Undoubtedly D’Annunzio’s unsparing revelation of
human deformity and ills will seem morbid to the unaccustomed mind;
but, conversely, it can be urged that the dread of these details is
in itself morbid. Then, too, we have an exaggerated horror of the
unpleasant, a natural, but saccharine, preference for happiness. As
a nation we are not conspicuously happier than Italy, but we clamour
with a deafening insistence for the semblance of a material good
fortune. Meeting pain no better and no worse than other nations, from
our written stories we banish it absolutely; but anyone who cares to
realise the beauty that, beyond question, pervades the following pages
will be obliged to harden himself to meet precisely the deplorable
accidents that he must face wherever life has been contaminated by
centuries of brutal ignorance, oppression and want.

Again, it is not in the larger aspects, the nobler phases, of suffering
with which we are concerned, but in the cold revelation of rasping
details, brutal sores and deformity, the dusty spiders of paralysis. If
this were all it would be hideous beyond support; but, fortunately, the
coldness is only in the method, there is a saving spirit of pity, the
valid humanity born of understanding. Such horror as exists here is the
result of D’Annunzio’s sensitive recognition of the weight of poverty
and superstition crushing men into unspeakable fatalities of the flesh.
A caustic humour, as well, illuminates the darker pits of existence,
ironic rather than satirical, bitter rather than fatalistic; and then
admirably exposing the rough play of countrymen like the rough wine
of their Province. In addition there is always, for reassurance, the
inclusion of the simple bravery that in itself leavens both life and
books with hope.

Yet, with the attention directed so exclusively upon national
differences, equally it must be said that no individual has ever
written into literature a more minute examination of actuality than
that in “Tales of My Native Town.” Indeed, to find its counterpart it
would be necessary to turn to the relentlessly veracious paintings
of the early Dutchmen, or the anatomical canvasses of El Greco.
D’Annunzio’s descriptions of countenances are dermatological, the
smallest pores are carefully traced, the shape and hue and colour
of every feature. This is set down not only directly but by means of
remarkable similies: Binchi-Blanche has a surly, yellow-lined face like
a lemon without any juice; Africana’s husband’s mouth resembles the
cut in a rotten pumpkin; Ciarole’s face was that of a gilded wooden
effigy from which the gilding had partly worn off; while Biagio Quaglia
reflected the brilliancy and freshness of an almond tree in springtime.

The direct descriptions are often appalling, since, as has already been
indicated, nothing is considered unimportant; there are literally no
reservations, or rather, no, prejudices. The physical disintegration
that accompanies death is, as well, recorded to the last black clot
and bubble of red froth. D’Annunzio is not afraid of death in the
context of his pages, he is never reluctant to meet the great facts,
the terrible penalties, of existence; rather it is upon them that his
writing is founded; it has, in the main, in these tales, two sides, one
of violence, of murder and venom, and the other an idyllic presentation
of a setting, an environment, saturated with classic and natural
beauty.

The mind, now horrified by the dislocated beggars gathered about the
blind Mungia, is suddenly swept into the release of evening fragrantly
cool like myrtles; or Turlendana returns from his long voyages and,
with his amazing animals, makes his way home into Pescara: “The river
of his native place carried to him the peaceful air of the sea….
The silence was profound. The cobwebs shone tranquilly in the sun like
mirrors framed by the crystal of the sea.” He passes with the Cyclopean
camel, the monkey and the she-ass across the boat bridge and: “Far
behind the mountain of Gran Sasso the setting sun irradiated the spring
sky … and from the damp earth, the water of the river, the seas, and
the ponds, the moisture had arisen. A rosy glow tinted the houses, the
sails, the masts, the plants, and the whole landscape, and the figures
of the people, acquiring a sort of transparency, grew obscure, the
lines of their contour wavering in the fading light.” 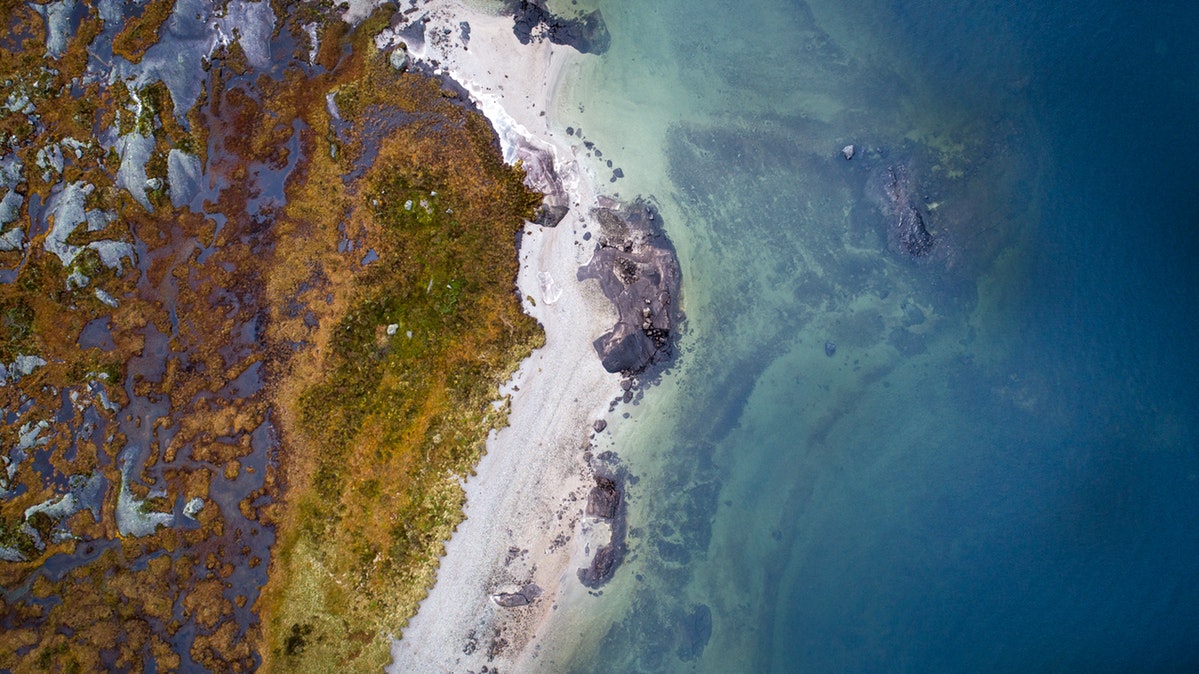 Nothing could surpass in peacefulness this vision, a scene like a
mirage of fabulous days wrapped in tender colour. Throughout the tale
of The Virgin Anna, too, there are, in spite of the vitriolic realism
of its spirit, the crystal ecstasies of white flocks of girls before
the Eucharist of their first communion. While it was Anna’s father
who came ashore from his voyages to the island of Rota with his shirt
all scented with southern fruit. The Virgin Anna has many points of
resemblance to that other entranced peasant in Une Vie Simple; but Anna
had a turtle in place of a parrot, and D’Annunzio is severer with his
subject than was Flaubert.

But such idylls are quickly swept away in the fiery death of the
Duke of Orfena, with the pistols ringing in high stately chambers,
and Mazzagrogna, the major-domo, a dripping corpse, hanging in the
railing of a balcony. There is no shrinking, no evasion, here; and
none is permitted the reader:—the flames that consume the Duke are not
romantic figments, their fierce energy scorches the imagination.