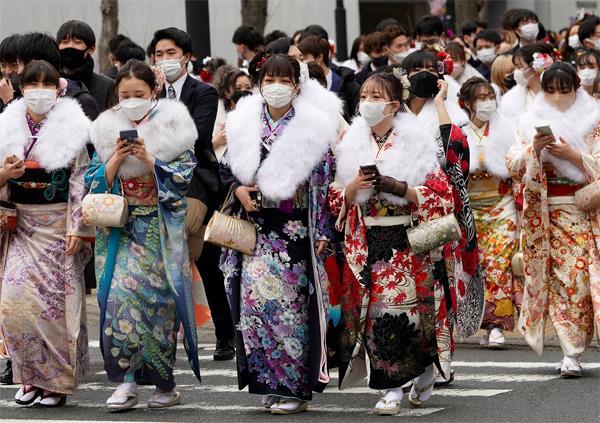 A Japanese woman wearing a kimono attends a coming-of-age ceremony on January 10, 2022.

According to Japan’s revised Civil Code, the age of majority will be lowered from 20 to 18 from April 1, 2022. This is the first time in 146 years that the age of adulthood has been revised since 1876 in the Meiji era when the age of 20 was defined as an adult. As a result, by April 1 this year, 18- and 19-year-olds (people born between April 2, 2002 and April 1, 2004) will become new adults, and the number is about 2 million.
What are the reasons for lowering the age of adulthood?

In fact, in Japan, the discussion around the reduction of the adult age has been around for a long time. As early as 2007, Japan began to revise the “National Voting Law”, discussing to lower the voting age of constitutional referendum from 20 to 18 years old, hoping that more young people can participate in it. A survey by the Ministry of Justice in 2008 showed that among the 187 countries and regions that stipulate the age of majority, 141 of them are 18 years old and below, while major developed countries such as the United States, Britain, Germany and France all stipulate that the age is 18 years old. At the same time, the voting age for referendum in many countries and regions is also the same as the age of majority. In May 2014, the House of Representatives of the Japanese Diet passed an amendment to the National Voting Act, which formally lowered the voting age for constitutional referendums to 18. In June 2015, the Japanese Senate passed the amendment to the “Public Office Election Law”, which also lowered the voting age to 18 years old. The above-mentioned lowering of the voting age has triggered discussions on the age of majority in the Civil Code related to national life, which is also one of the reasons for the lowering of the age of majority.
Secondly, under the situation of declining birthrate and aging in Japan, lowering the adult age will help encourage young people to participate in social and economic activities as soon as possible, help them work and live independently as soon as possible, and inject new vitality into the society. A Japanese consortium conducted an online survey in early 2022 among young people aged 17 to 19 in Japan, the United States, the United Kingdom, China, South Korea, and India. The results showed that the proportion of Japanese who answered “I feel like an adult” Only 27%, while the United States and the United Kingdom accounted for 86%, India 84%, China 71%, South Korea 47%. When asked about “I look forward to the future” and “I want to challenge new things even if there are risks”, Japan’s response rate is also low. The consortium said the data showed a sense of unease and powerlessness among Japanese young people about the future.
In addition, the lowering of the adult age also responded to the public’s criticism of the “Juvenile Law” and helped to better combat juvenile delinquency. Japan’s “Juvenile Law” applies to juveniles under the age of 20. The original intention of its establishment is that more emphasis should be placed on re-education for juvenile offenders, and those who are prosecuted as criminal cases like adults are limited to a smaller part of more serious cases. The crime of homicide is also prohibited by the media from reporting and disclosing personal information such as his real name and face photos. However, with the increase of juvenile delinquency, more and more people believe that the punishment for offenders under the age of 20 is insufficient, so the “Juvenile Law” has also been revised at the same time. Although the revised “Juvenile Law” still targets juveniles under the age of 20, people aged 18 and 19 are regarded as “special juveniles”, and their criminal behaviors are dealt with more closely to adults, and their names and names will be disclosed. photo.
Changes and changes after age reduction

The age of majority stipulated in the Civil Law has the meaning of “one person can perform the contract”, and also has the right to “do not obey parents”. After reaching adulthood, even without the consent of their parents, they can sign various contracts according to their own wishes, such as signing mobile phone contracts, renting agreements, applying for credit cards and loans, etc.; You can also obtain a passport valid for 10 years, obtain a certified public accountant and national vocational qualification certification in law and administration. In addition, the legal age of marriage for women has been raised from 16 to 18, with the same age for men and women. On the other hand, the age limit for drinking, smoking, horse racing, etc. is still 20 years old. It can be seen that it is still out of consideration for the protection of young people.
It should be noted that in Japan, if minors sign contracts (such as employment contracts, consumer contracts, etc.) without parental consent, they can be revoked according to the “minors’ right to cancel” stipulated in the Civil Code, which is to protect them. Prevent accidental damage. But once you reach adulthood, you can sign a contract without parental consent, and you can no longer exercise the right to cancel as a minor. In other words, only I am legally responsible for the conclusion of the contract. Under such circumstances, people from all walks of life in Japan are worried that the 18-year-old adult contract will encounter disputes such as malicious fraud. In addition, there will also be new changes in the field of labor. Previously, when companies hired minors under the age of 20, they needed to have a guardian’s signature on the consent form; when labor disputes occurred, they also communicated with minors. A guardian’s opinion and consultation are required. After the adult age is lowered, companies no longer have to obtain the consent of their guardians when hiring workers over 18 years old.
Regarding the reduction of the age of adults, many Japanese people are more concerned about whether the “adult style” will be held at the age of 18. Not long ago, the Ministry of Justice carried out a survey on holding an adult ceremony among municipalities. Among the 1,176 municipalities that responded, only two planned to hold an adult ceremony for 18-year-olds. After the age of 20, many young people face multiple exams, so they still choose to hold the adult ceremony at the age of 20.
Awareness and support from all parties

Shortly after the reduction in the age of majority was implemented, Nippon Information Corporation conducted a survey to understand the awareness of new adults and their parents about the content of the adjustment. The results show that the “new 19-year-old” who knows the most about the policy adjustment (“new” refers to the age group from April 1, 2022 to March 39, 2023, the same is true below), the proportion is 48.1% . The awareness rate of “new 20-year-old” youths on the changed content was 38.9%, the lowest proportion among the new 17-20-year-old group. In contrast, the parents of new adults were only 26.8% aware of content changes, and 69.5% of the population only knew about the downward adjustment of adult age, but did not know the specific changes. In addition, the “new 18-year-old” youth are better than the “new 20-year-old” youth who can correctly understand the changes after the new adult, such as “having the right to vote”, “signing a mobile phone contract” and “no parental consent for marriage”. The “new 18-20” support rate for the reduction of the adult age was 48.8%, but 34.7% of the new adults expressed strong anxiety and worry, including “uneasy about increasing responsibility” (45.9%) and “suddenly being I feel uneasy about being treated as an adult” (37.4%), and they are also worried about possible consumer disputes and fraud. For adults, the top things they want to do are “accommodation and travel” (29.4%), “applying for credit cards” (26.1%), and “staying out” and “living alone” (23.1%), all pointing to For going out freely type action.
After the adult age was lowered, the Japanese government took various measures to help minors learn and master various social rules after adulthood in advance, including the importance and significance of contract signing. The Consumer Affairs Agency of Japan has set up a special introduction window for “adults from 18 years old”, which clearly states that although 18-year-old adults are responsible for signing contracts, 18-year-olds and 19-year-olds are troubled by purchasing products and other services. , you can contact the “Adolescent Consumer Special Advisory Hotline”. The Consumer Affairs Agency website also features educational animations “Opening the Door to Society” and consumer education materials for high school students. The Ministry of Education, Culture, Sports, Science and Technology also stated that as the age of adulthood decreases, high school students must have the basic qualities and abilities to enter the workplace and society in the future, and schools also need to strengthen education for high school students on laws and consumers. In addition, the Japan Federation of Judicial Scribe Associations (Judicial scriveners are professionals who help the public produce legal materials to submit to the courts or the Legal Affairs Bureau. The federation is composed of 50 judicial scrivener associations across the country) through its website. Information about lowering the age of majority has been sent by teachers, staff, etc. The website introduces legal issues and disputes that may occur when the age of majority is reduced, and methods for solving them through specific examples. The federation will also send more complete promotional information to new adults in a targeted manner. Various departments of the Japanese government, social groups, and non-governmental organizations have each carried out relevant publicity and policy connection work for the reduction of the adult age, and also expect more new adults to join in to inject new vitality into the society.