A woman, nearly forty, is about to become a mother; a girl, under eighteen, is about to become a mother. A woman and a girl meet in the same delivery room, give birth to a daughter at the same time, and fate begins to entangle, until they discover the fatal joke of fate for them: the children of the two were wrongly swapped by the hospital…
In this story, we are not For the first time, I heard that all kinds of “catch the horse” plots based on extreme coincidences will make many movie-watching audiences cry out for blood. But Spanish film giant Almodovar will not stop at telling a strange story. By comparing two generations of women, Almodóvar’s new work “Parallel Mothers” makes an ambitious attempt to expose the power structure of Spanish society that the two heroines share in common, and traces this structure back to Francisco. The Franco dictatorship, thus reminding people of the perpetual and pernicious effects of totalitarian structures on a country.
Lateral: Parallel lives, non-parallel emotions and politics

The most obvious structure of Parallel Mothers is, of course, the horizontal contrast between the two heroines, Janice (Penelope Cruz) and Ana (Milena Smit). Both women live in Madrid, conceive, give birth, and have their own babies at the same time, but their ages, ideas and visions are vastly different.
Janice, who is entering middle age, is a quite successful photographer. Living alone, she has a considerable degree of control over her own destiny: she can make independent decisions about her life status and direction; Which jobs are accepted. And when dealing with emotional relationships, her methods can also show the sophistication that a seasoned beauty should have: properly control the distance, deal with her lover’s jealousy easily, and cut it off immediately when the relationship enters the dangerous shoal. courage. She’s probably what all women her age want to be.
Anna, who is still underage, is struggling to control her life. She had no clear idea of ​​where her life was headed; the pregnancy was an accident she loathed. She is young and clumsy when facing intimacy, and she does not form her own point of view when facing the world, and she often echoes what others say. And her divorced parents did not provide her with an ideal example to follow: her father was constantly shirking her responsibilities, and although her mother loved her daughter, she also had an acting career to pursue, and was absent most of the time.
The two heroines meet by fate, and after the unexpected death of Anna’s daughter (actually Janice’s daughter), they start a relationship that is both mother-daughter and lover, due to the difference in age and concept of the two. , this relationship is full of fierce confrontation. Indulged in a quiet relationship with Janice, young Anna lacks awareness of the world in broad dimensions; as a victim of sexual assault, she blindly repeats her father’s cliché about “letting go of the past and embracing the future.” No wonder Janice scolded her mercilessly to wake her up: “It’s time to open your eyes and see what kind of country you live in!”
Janice says this apparently because she knows that all Spanish women face more or less the same situation. Janice was not a victim of sexual assault and was not raped by her classmates like Anna, but she also had to use her body as a bargaining chip in order to achieve her goals. This is also an important reason why women always have a deeper understanding of the power mechanism: the explicit or implicit power relations in society always act directly on their bodies. Although Janice is a photographer who can “manipulate” men at work, in wider daily life, she is ultimately an object and object in a patriarchal society. This is also the fact that she is trying to make Anna see clearly. 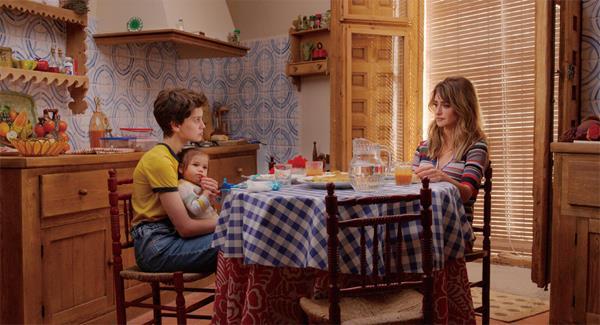 Where does the trauma of women come from? The answer is clearly in ubiquitous power structures. In order to prevent the tragedy from happening again, Janice carries out her own awakening practice: understanding the power structure itself. This is also her quest throughout the story: she wants to bring back to light the remains of her great-grandfather buried in the mass graves by the Franco regime, in order to rediscover the totalitarian structure hidden behind contemporary Spain.
Longitudinal: A Geological Exploration of Totalitarian Structure and Thinking

The act of excavating the mass graves has a strong metaphorical character, both for Janice in the story and for Almodovar who tells the story. For Janice, it was a process of going back to the roots and recovering secrets; for Almodóvar, this action violently reflected his critique of contemporary Spanish society: totalitarian thinking was never really destroyed. , itself, and its incriminating evidence, were simply buried by the country. It no longer exists on the surface, but in fact it has always existed in the deep layers of social consciousness and subconsciousness, and it shapes what everyone thinks, thinks, says and does.
Almodóvar’s carefully designed imagery also echoes the concept of “topography of power” by French philosopher Michel Foucault. In Foucault’s theory, just as the modern terrain is shaped by the ancient terrain, the power structure of the current society has also been shaped by the historical power structure buried in the depths of time. Only by digging can people gain a deeper understanding of their current situation.
Almodóvar took aim at the oblivion of the history of totalitarianism by mainstream Spanish ideology. The accountability of the dictatorship and the “rehabilitation” of the victims of the Franco regime have slowed down significantly in recent years. Spanish politicians even publicly stated that during their tenure, they did not commit the “Historical Memory Law” for the purpose of accountability. Spent a penny.
The mainstream people’s acquiescence to oblivion under the guidance of public opinion, their infinite worship of power, and their lack of empathy for the inferiors in the power system are the evil consequences of power thinking, which are concentrated in “Parallel Mother” as Anna A body damaged by bullying by men of the same age. The consequences of not facing the deep structure of society and not taking stock of history is to allow atrocities to repeat themselves again and again.
The power system shown in Parallel Mother is festering. But at least, in an Almodovar movie, women are always tough and great, they have both the courage to look directly at the sun and the resilience to endure the harsh winter. While men are turning into ashes and dust like fire and soil, women are flowing like rivers as always. This offers hope to the whole world.