AMD’s highlight this year is of course the ZEN3-based Ryzen 5000 processor and the RDNA2-based Radeon RX 6000 graphics card. Among them, the performance of Ryzen 5000 can be described as shocking, not only the game performance fully surpasses the competing flagships, but it can even leapfrog the competing HEDT flagships as a consumer flagship. This undoubtedly greatly enhances the reputation of AMD products in gaming applications. In terms of graphics cards, from the information released by AMD’s press conference, RDNA2 can be regarded as a dark horse that allows AMD to return to the top flagship graphics card market. With the blessing of various new black technologies, the RTX 30 series is facing the competition. Products can maintain a certain comprehensive advantage, and are more competitive in terms of energy efficiency ratio and price. So, is the strength of RDNA2 as powerful as the official PPT said? After a comprehensive evaluation of the official AMD Radeon RX 6800/RX 6800XT samples we received, everyone can see the truth.
Re-evolved RDNA2 game architecture: higher performance, lower energy consumption 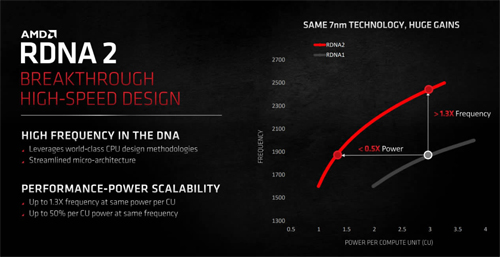 According to AMD’s official statement, RDNA2 is evaluated as a “breakthrough high-speed design” that can achieve higher operating frequencies and higher energy efficiency ratios. Compared with Radeon RX 5700XT, the performance is doubled, and the performance per watt is increased by up to 54%. All of these make it possible to greatly improve the actual combat performance of RDNA2. Of course, this time the RDNA2 architecture also brings AMD’s newly designed AMD Infinity Cache (described in detail later), through which it can provide higher data transmission speeds under the premise of lower energy consumption. In addition, RDNA2 also provides support for the next generation of advanced features, including DX12U and DirectStorage API.
From the manufacturing process point of view, although both RDNA2 and RDNA use 7nm technology, the highest frequency of RDNA2 can reach 1.3 times that of RDNA under the same power consumption, while under the same frequency conditions, the energy consumption is only half of the latter. In this way, Radeon RX 6000 series graphics cards using RDNA2 architecture can well control power consumption and temperature, while achieving higher operating frequencies and providing stronger performance. Judging from the official power consumption of the entire card, even the highest-end Radeon RX 6900XT is only 300W, which is significantly lower than the 350W of the rival RTX 3090. Next, let’s take a look at the improvement of RDNA2 over RDNA in terms of architectural details.
In RDNA’s Shader engine, each CU has its own L0 cache and independent L2 access, and 4MB L2 supports sharing between the Shader engine and the command processor. Equipped with 256-bit wide GDDR6 video memory with a bandwidth of 448 GB/s. It is particularly worth noting that the video memory controller is connected to L2 for data transmission.
In RDNA2, the AMD Infinity Cache solution was adopted for the first time, including the L2 Cache, which is four times the density of the traditional cache, with a capacity of 128MB. It is designed for high game load hit rates. You can see from the picture that the memory controller and AMD Infinity Cache communicates directly, which is completely different from the connection method of RDNA. From the official specifications, the AMD Infinity Cache and RDNA2 engine communicate through the AMD Infinity Fabric bus of 1024 B/C. The 16×64-bit channel can reach up to 1.94 GHz operating frequency, providing 4 times the 256-bit GDDR6 memory. Peak bandwidth, and extremely high bandwidth brings a breakthrough game performance improvement. In addition, RDNA2 has also greatly increased the chip scale. Each Shader engine includes 20 CUs, which is twice that of RDNA. Therefore, RDNA2 contains up to 80 CUs, which is exactly twice the size of RDNA. Of course, in addition to doubling the number of CUs, the operating frequency of RDNA2 has also increased to 1.3 times that of RDNA. Of course, RDNA2 also brings the ray tracing hardware acceleration function that the majority of players pay attention to. Each CU unit is equipped with a Ray Accelerator (RA). According to the official data, the hardware ray tracing performance of RDNA2 is 10 times that of the software solution. .

From the comparison data, the combination of AMD Infinity Cache + 256-bit GDDR6 video memory has a bandwidth of 2.17 times that of traditional 384-bit GDDR6 video memory, while the energy consumption is only 90% of the latter. AMD Infinity Cache also brings better high frequency adaptability, allowing the RDNA2 engine to achieve industry-leading operating frequencies. Compared with RDNA, the memory latency of RDNA2 equipped with AMD Infinity Cache is also reduced by 34%.
In terms of functions, RDNA2 also brings new upgrades, such as achieving a more exquisite screen through DX12U, and faster game loading through DirectStorage API. In addition, RDNA2 also supports DXR-based ray tracing, VRS (variable rate shader), MESH Shaders (mesh shader), Sampler Feedback (sample feedback).
In general, the performance of RDNA2 is equivalent to twice that of Radeon RX 5700XT, and the performance per watt is increased by up to 54% under the same process. At the same time, it brings full support for the advanced features of DX12U (currently it has perfectly supported 10+ optical chase Game masterpiece).
It is worth mentioning that the “big guy” David Wang who created the AMD GCN architecture in the past, Mr. Wang Qishang, returned to AMD and immediately started the research and development of the new architecture, that is, the RDNA2 architecture used by the RX6000 series. The “big guy” is the “big guy” , The RDNA2 architecture, which is completely dominated by him, has almost evened the gap between the previous years and helped AMD graphics cards to overtake in corners by relying on architectural innovations while the process remains unchanged. The era of duopoly in the graphics card market seems to be coming soon.