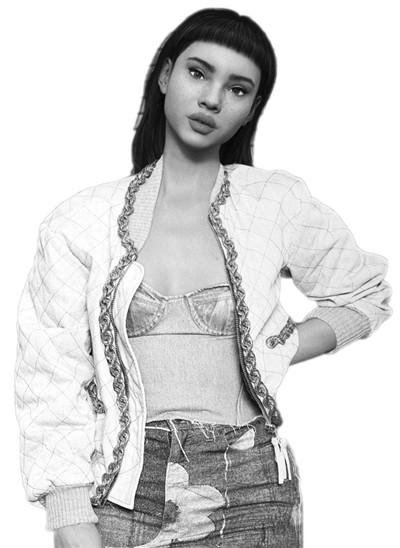 “Virtual idols” are getting more and more into reality. At the 17th China International Digital Interactive Entertainment Exhibition (ChinaJoy) held in Shanghai recently, several girls dressed up as “virtual singers” Luo Tianyi, promoting garbage classification in the venue, attracting many fans to participate; novels and animation IP “Full-time master” exhibition area, the audience lined up and the protagonist Ye Xiu’s exhibition board photo… Many animation and game characters are now become idols that young people really pursue. These virtual idols are given a flesh-and-blood character, receiving advertisements, out of peripheral products, and holding birthday parties. In particular, in the past two years, thanks to technological breakthroughs such as virtual reality (VR) and augmented reality (AR), some Chinese companies have created “virtual entertainers” for young people, such as virtual anchor songwriters and virtual singers Luo Tian. Wait. They can sing and laugh on the screen, and can interact with the audience on the stage in a holographic projection, and they are as good as real artists.

Luotianyi is one of the most popular virtual idols in China with the widest audience. In his image setting, Luo Tianyi is a 15-year-old girl who is “enriched and looks a little rash and naturally staying”, usually wearing a blue-white skirt. Using techniques such as a voice synthesizer, she can sing in Mandarin, and the sound is very similar to humans.

Natsume, a student from Shanghai, is a fan of virtual singer Luo Tianyi. She told the Global Times reporter that when Luo Tianyi just “debuted” in 2012, Natsume, who was still in junior high school, liked the avatar of singing. “The artist designed a small round face for her, very cute.” More importantly, Luo Tianyi’s way of simulating vocals through technology has made her feel very interesting and “feel very fresh”.

Unlike live singers, a large part of the virtual singer’s work is created by fans. Companies with virtual singers usually sell the singer’s sound library for hundreds to thousands of yuan. Fans can only “train” the virtual singer to sing the corresponding melody with the corresponding vocal synthesis editor. Some of the songs that Luo Tianyi sang the most, such as “Millennium Recipe”, “Ordinary Disco”, etc., came from the hands of fans. Natsume said that the success of Luo Tianyi was largely due to the fans who wrote her good songs. Natsume likes the author of “Ordinary Disco”. “The songs he wrote for Luo Tianyi are very good, and the style is very attractive.”

Compared with real people, the advantages and disadvantages of virtual singers in singing are obvious. As an intrinsic sound synthesis program, Luo Tianyi, who has a wide range of sounds, can easily sing high and low sounds that humans can hardly reach. However, some people who criticize the “machine” without human emotions are difficult to express the joys and sorrows in the songs. This is very tolerant to Natsume: “There is really not much emotion in the singing of the machine, but there are some genres such as electronic music. I think that Luo Tianyi is more suitable to sing, and it will not be too hard.”

Nowadays, the popularity of some virtual idols has already reached the “outside” of the second element. At the beginning of this year, Luo Tianyi held a holographic concert in Shanghai. The organizer invited the pianist Lang Lang to collaborate with him to perform songs such as “Jasmine”. The breakthrough interpretation of the “Dimensional Wall” was recorded by Hong Kong’s “South China Morning Post”: “Lang Lang’s piano and Luo Tianyi’s electronic synthesis sound complement each other, and the stunning visual effects of the concert scene add to its icing on the cake. They waved the blue light sticks with the rhythm and shouted the name of Luo Tianyi. Some fans even burst into tears.” In addition, Luo Tianyi also appeared on the local TV’s New Year’s party several times, with Xu Wei and Zhou Huajian. Waiting for the stars to sing, their popularity spread quickly to the crowd outside the “secondary”.

Ye Xiu, the protagonist of “Full-time Master”, frequently speaks for products this year, attends offline activities and plays real drama. His image has been on the big screen of Times Square in New York, as well as the light boxes of bus stations in several cities in China. On the night of Ye Xiu’s “Birthday” in May this year, Hangzhou Qianjiang New City held a light show with his theme. On Friday, the “Full-time Master” movie will also be screened in domestic hospitals.

“We set up a variety of forms around the fans’ minds, organized various exhibitions, birthday parties, etc., so that his image is constantly full and three-dimensional, and the influence is gradually expanding.” When talking about the operation of this IP, the relevant person in charge of the reading group They said that their development of Ye Xiu and “Full-time Master” is still in its infancy. “With the development of technology, virtual idols will have more forms of expression and application scenarios. They will break through the boundaries between virtual and reality and create greater business. Value.” In the future, personalized idols that can interact with fans one-on-one will appear, injecting more energy into the industry and the market.

The popularity of virtual idols among young people has also led to reflection. “Is it correct to use avatars to sell products to teenagers?” The British “Daily Mail” said on the 11th that the US virtual network Red Miqueira’s fan year

Most of them are between the ages of 18 and 24, and many are under the age of 17 – these teenagers may even become anxious because they cannot reach Miqueira’s “American standards.” Professor Michael Berry, a British clinical psychologist, believes that virtual idols bring unrealistic imagination to young people. “When they see these images, they think they must pursue them. This phenomenon is worrying because we I don’t know what is behind the virtual idol.” ▲

In addition to Luo Tianyi, the words of the melodious mezzo-soprano, the music that is known for the melody of the melody, and the most popular Japanese eponymous nicknamed the “green lady”, Korea can sing and dance. SeeU, etc., are all successful virtual singers in the industry. In the United States, the virtual network red named Miqueira has 1.6 million fans on social media. The “mixed” model in Los Angeles not only endorsed a number of luxury brands, but also was named “Time” magazine by the US magazine. One of the most influential 25 people on the web.

The role of some popular anime game IP is also very popular among young people. Ye Xiu, the protagonist of the novel and the animated “full-time master”, is a phenomenal virtual idol. Some media have said that Ye Xiu “has more than 1 billion yuan in a year.” Ye Xiu in the work is a 20-year-old e-sports player whose shape and character are loved by many readers (audience). “Ye Xiu is very cool and handsome, and the three views are very positive.” The 26-year-old fan of the nicknamed Grapefruit believes that Ye Xiu is very responsible and can maintain the love of things for more than ten years. These qualities are commendable. “I rarely encounter such people in real life, at least I can’t be as persistent as he is.”

With a near-perfect and non-deteriorating appearance, it is indeed a big advantage for virtual idols compared to real stars. The relevant person in charge of the Shanghai Read Group, who owns the “full-time master” IP, told the Global Times reporter that the virtual idol life cycle is usually longer than that of the newcomers in the entertainment industry, and that “the people are unified and not easy to collapse.”

“I am more comfortable with chasing virtual idols,” said the grapefruit. In the eyes of virtual idol fans, they never have to worry about their “love beans” suddenly exploding with drugs, affair, and other detrimental images or even illegal activities.

Since coming into contact with “Full-time Master” in 2015 and liked the role of Ye Xiu, Grapefruit and other virtual idol fans have tried many ways to support them: buy around, visit the exhibition, participate in offline activities… For 4 years Grapefruit costs nearly 10,000 yuan on the IP of “full-time master”. In her opinion, there is no difference in the way to support stars and virtual idols. “If you like him, he will spend money for him.”