On the black sand beach of Wushigang, Taiwan, a wave of white fine waves rushed toward the beach, then shattered and disappeared. I stood here and started my surfing career.

I walked into the waves with a surfboard, and the sea water immersed my body step by step from the foot to the knee to the chest. The waves are either urgent or slow, and they are constantly shot to the body. The first thing I face is the waves that rush in layers, not how to surf. I tried my best to fight against the waves, and my feet slammed on the sand, consuming a lot of physical strength, but still did not reach the wave area of ​​the novice. I gradually realized that we must not be able to fight against the waves, and we must first learn to obey. When the waves come, let go of your feet and move with the waves. At the moment of the surge, the sea will have a backflow, and with this force continue to move forward until the wave zone. 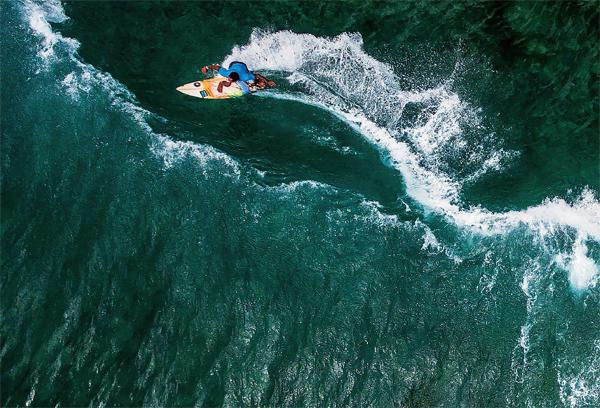 After experiencing the failure of flaps, stalls, etc., I successfully stood up on the board and rushed to the first wave. This is an unspeakable experience, and the waves at your feet take you as fast as you can. This speed of pleasure is not only the instinct of human beings, but also the instinct of many animals. Even the dolphins will surf in the sea and chase this pleasure. But this is not only a pleasure brought by speed, it is not like the stimulation of the car gallop, but a real experience of the power and speed of the living from the soles of the feet to the body.

It is surrounded by the sky, the sea, the earth, the air and the sun. In the 360-degree full space, you can feel a kind of vitality at your feet, and even create an illusion of driving the waves.

Athletics, aesthetics, attitude
In the novice stage, surfing can be roughly divided into three parts: watching waves, catching waves and standing boards. The core principle of surfing is to use the power of the waves to get the surfboard to start. When the surfboard has enough speed, the rogue stands up and controls the board by adjusting the center of gravity. After the beginners have passed the white-wave stage of the shallower wave area, they will enter the stage of learning to sit, turn, and catch the green wave. The new step is to complete various actions on the board. Surfing is an ancient sport that has been around for hundreds of years. In the 18th century, adventurers discovered the habit of surfing the locals in Tahiti (Tahiti, in the South Pacific). In ancient Hawaii, surfing was not only a sport, but more like a culture. Around the surf, there is a ritual to sacrifice to the gods. Those with superior skills can be respected.

Surfing into modern society, thanks to George Freeth from Hawaii, he is also known as the “father of modern surfing.” In 1907, he revolutionized surfboards and brought surfing to California to spread around the world. The Google site changes the logo every year and commemorates the great surfers on the homepage.

At the very beginning, the waves were longboards made of wood. Today’s surfing is roughly divided into short and longboard. The long board has a large buoyancy and is suitable for newcomers to get started. The advanced movements are mainly for the movements such as Hanging Five and Hanging Ten. Longboard masters dance and walk on surfboards on turbulent waves, such as elegant swan.

What the short board shows more is a violent aesthetic. It is small in size, light in weight and faster in speed. Although it is difficult to control, it can make more cool movements on the waves and waves, full of power and beauty. The most exciting and dangerous wave in surfing is also the use of short boards.

Surfing as a competitive sport, the World Surf League is held worldwide, and it has also become the official competition for the 2020 Tokyo Olympics. China has also established the surfing national team to prepare for the Olympic Games. In competitive competitions, you can show the technology and beauty of surfing.

Surfing is not just a sport, it is also a life attitude. Both sports and life constitute the culture of surfing.

Surfing needs to be close to the waves, and the daily conditions are different. Sometimes the sea is as calm as the lake, and it is destined that the more pure Surfer (surfers) have to get close to the sea in order to catch the waves. At the same time, surfing requires a lot of practice, and only when you embrace the sea, the sea will feed you back. This makes the sport and life tightly tied together.

Chasing the waves of Bali
Indonesia’s Bali is well known for its magnificent Lovers Cliff, Tanah Lot Temple, Jimbaran Beach with a beautiful sunset and the leisurely Ubud jungle. But Bali also has a side that is not known to ordinary visitors: a surfing spot. Here, you can feel the purest surfing spirit.

Bali and its surrounding islands have many different styles of waves. Kuta Beach is the most mature surfing area on the island, with numerous surf schools and surf equipment stores. Its long and narrow beach has many areas for surfing. At the same time, Kuta is located in the urban area and has a mature business district.

Of course, there is a lot of crowding here, and some Surfer will choose to go to some more difficult and fewer waves to pursue the purest surfing experience. For example, Uluwatu, which is well-known in Bali, is under the cliffs. It has a peerless wave and a dangerous reef. In the event of a major accident, it will cause damage. The fascinating waves hidden in the world are difficult to reach and the living conditions are more difficult.

There is a video of Masters of Indo on Youtube, which tells the story of the Indonesian ronin Marlon Geibor. Marlon is from a surf family who has been surfing with his father and sister in Bali since childhood. They lived in a smashed log cabin with a hammock hanging between the coconut trees outside the wooden house, surrounded by simple villagers. Marlon took his 10-year-old nephew, Varun, in the blue ocean, accompanied by the sun or the setting sun. The waves here often have extremely difficult tube waves, and Marlon and Varun are free to shuttle, fly and fall.

Marlon’s fantasy story not only exists in video. I once picked the waves near the hotel on the island of Lembongan, near the island of Bali. On the small beach by the sea, there is a cabin for renting surfboards. There are only two or three children in the store. After speaking the price with the lead kid in English and gestures, I picked a suitable surfboard and went to the sea.

I have a friend who is surfing in Gili Island near Bali, when a chef at the restaurant and her are soaking in the sea. When someone ordered a meal on the shore, the staff shouted and called him back to cook. He slammed and returned to the shore to do his job. When the task was completed, the board was picked up and rushed into the sea.

Give life to the ocean
Love surfing is never just the exclusive right of the seaside residents. Many roners have left the sea because of their life and personal choices, and are trapped in the city, but their desire for freedom and the ocean has never disappeared.

In the bustling Hong Kong, there are actually waves, but there are very few waves in Hong Kong. The most famous and lively is Big Wave Bay. Here is the sustenance of the city’s middle-aged people. They take heavy surfboards and cross the mountains to the remote waves at Shek O. They put down all the identities – business elites, designers, big stars – they are just surfers. .

I have a Hong Kong friend, Mavis, who is also a frequent visitor to Big Wave Bay. She grew up studying in the UK and stayed in a bank in London. She then quit her job and traveled around the world. Bali, Hawaii, Morocco, France, Portugal, Hainan, Taiwan… She has left a lot of footprints in the world. She turned from a white-skinned girl into a dark-skinned, healthy-haired female Surfer. She gave up the bustling urban life to surf, the reason is very simple, is love.

When I was volunteering at the Hainan Surf Club, I met Mavis and met many people who love surfing. Some people stayed at the beach and never left the surf; more people chose to leave and return to their original lives. But I believe that every person who loves surfing has a desire in his heart, and he has let go of the world and disturbed him to the beach and handed his life to the ocean.

Life at the beach is simple, and most of it is around the waves. When there is no wave, chat, drink, exchange surfing skills and tips, learn about the customs and cultures of their respective countries, or drive to towns, food, movies. When the interest is high, everyone will go to the sea to catch sea urchins. The skilled rogues will also catch crabs, dig conch, and fish. The waves will also organize activities to clean the beaches, protect the oceans, and rescue the windstorms, and try to maintain their homes.

Surfing is essentially a movement full of individual heroism. A person, holding a board, walked into the ocean without hesitation, and went alone to meet the test of the waves. This is a torture of self, facing the lack of material and spiritual desires, challenging yourself, recognizing the self, facing the inner fears and desires; embracing the ocean, fearing the ocean, and personally feeling the rush of the sea. Move, to understand its trend, its voice.