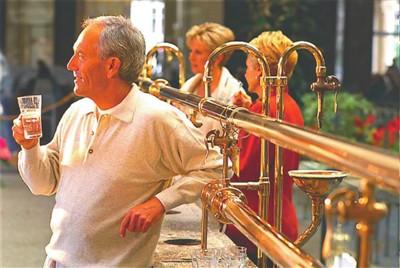 Located in the small town of Bad Kissingen in northern Bavaria, Germany, the population is only over 20,000, but it is quite famous. In history, Princess Sissi, Tsar Alexander II, Iron and Blood Prime Minister Bismarck, writer Tolstoy, and painter Menzel have all been there. Because it is the famous “Spa Capital”.

Preserving the ancient tradition of spa

From the starting point of the “Romantic Road” – Würzburg, the reporter arrived in Bad Kissingen in less than an hour. The small town is close to the Len National Park and is picturesque. As early as the 13th century, the small town was officially named Bad Kissingen. It is famous for its long history, beautiful environment, sound urban healing facilities and rich culture. What is more worth mentioning is that there is still an ancient tradition of distributing therapeutic water.

The therapeutic springs of Bad Kissingen have a long history, and whether they are drinking or bathing, they are all good and harmless. “In the 16th century, Bad Kissingen was already a small and famous spa resort. In the 19th century, it was well-known among the European aristocracy. The kings of many countries also like to hold summer social activities here.” Bavarian Tourism Bureau staff Reporters said that since the beginning of the 20th century, more and more civilians have become visitors here.

Today, there is still an ancient tradition of spa treatments, and seven mineral-rich therapeutic springs “bubble” throughout the town. Each treatment spring has different health care methods, such as drinking water therapy, bathing and so on. The minerals contained in these springs have a good effect on the treatment of the digestive system, upper respiratory system, physical fatigue and anemia.

The most famous treatment spring is the Lakochi Spring. In 1737, in the renovation of the Saale River that crossed the city, the architectural engineer Batasar Norman discovered the Lakochi Springs. The medical utility of Lakchi Springs was determined by a study by local pharmacist Berkbel. It contains iron, potassium, calcium, magnesium, manganese, strontium, sulfate and other substances, can treat stomach, gallbladder and other diseases. Since then, Lakchi Springs has gained a reputation and is widely used in drinking water therapy and bath therapy.

Max Springs is the oldest spring in a small town. In the 16th century, it was first proven to have a therapeutic effect. Because it tastes sour, it was called “sour spring”. According to the historical records of the Würzburg Catholic Church, as early as 1520, the Catholic clerics used the “sour springs” to bathe. As for why it is called Max Springs, it is related to the Bavarian King Maximilian II. He has led his family and entourage to Barthic Singen for many times to donate and research the treatment springs here and promote them. In order to show respect to him, the locals use his nickname

To name the oldest spring in the city. This kind of spring water has a good effect on urinary tract infections and stone disease.

The other five therapeutic springs are Round Well Spring, Meiquan, Old Louis Porter Springs, New Louis Porter Springs, and Pandur Springs, each with its own story and treatment features. In addition, there is a kind of “bitter spring” in the small town. It does not have a separate spring. Instead, it adds elements such as magnesium and sodium sulfate to the Lacchi Springs.

However, it is difficult for visitors to Bad Kissingen to taste all the spring water in a short time. It doesn’t matter, in the small city center of Europe’s largest promenade, there is the Shinquan area where visitors can taste these therapeutic springs. Lisa Schleier is a staff member here and is known as “Ms. Spring Water”. She told reporters that the Pinquan District was opened at 7 am, and it was also convenient for the citizens who went out in the morning to have a drink.

It should be noted that spring water can not be used casually. It is generally necessary for a doctor to prescribe a prescription for symptomatic “springs” in order to alleviate health problems or prevent diseases. The staff told reporters that some guests only want to drink spring water to increase their strength and improve their immunity. Even so, you need to consult a doctor first. The staff will pick up the cup and place it under the tap to fill the visitors with fresh spring water that suits them. Lisa said that the best effect on empty stomach is that the body can better absorb the minerals in the spring water.

The reporter tasted these treatment springs one by one. Really, the taste is not good, some are like sea water, and some are obviously bitter. However, when Lisa said the benefits of the water to the body, the reporters finished drinking like the other visitors. Many local residents told reporters that they would drink a cup of therapeutic spring water according to different needs every day. This is the secret of the longevity of small town residents.

Choose “Queen of Springs” every year

Benefiting from Tianci Springs, the small Bad Kissingen has nearly 40 different types of sanatoriums and hospitals. This small town is also close to China, and football teams have come here to conduct training. The famous pianist Lang Lang also visited here many times to participate in the summer music festival. And China’s well-known physiotherapy brands have opened branches here.