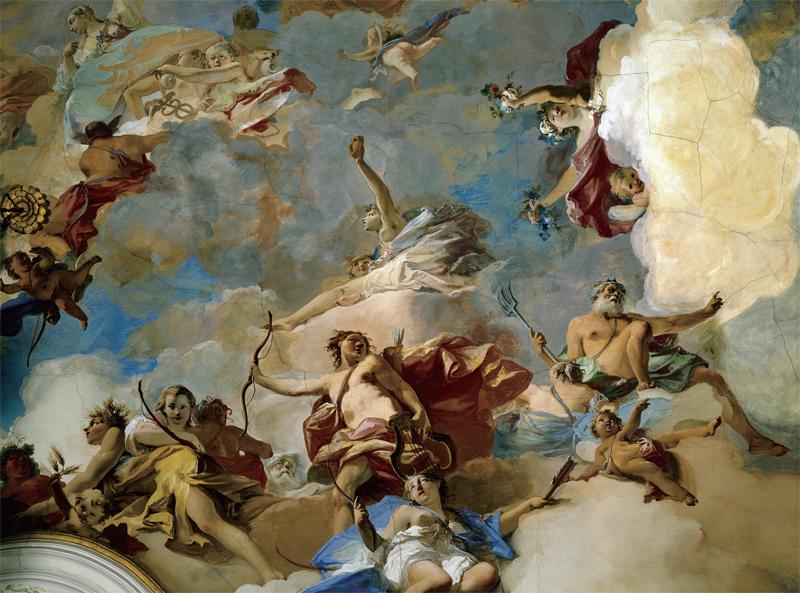 In the end, in the form of ancient Greek philosophy, the quality of human philosophy was finally finalized, and the later philosophical path was also stipulated to a considerable extent, so that Whitehead said: “The entire history of Western philosophy is nothing but a footnote of Platonism.”

Logic of debate
Later, the creators of ancient Greek civilization that we are familiar with are not the aborigines of the Greek peninsula.

Zeus, the king of the gods, ruled the universe and enjoyed the supreme status, but from time to time it turned into a variety of ways to sneak into the world, leaving the mortal woman a half-human and a half-sacred child.

From the perspective of the present, the myth of Olympus is quite secular and open. Among them, the god is rationalized and becomes like a human being. He has seven emotions, joys, sorrows and sorrows, and even God is subject to an inescapable fate.

The rational spirit exhibited by the ancient Greeks in religious thinking greatly influenced their philosophical tastes. In the six or seven BC BC, when ancient Greek religions turned, natural philosophy emerged.

At that time, the ancient Greek philosophers knew the world very plainly.

Thales believes that “everything is born in water, everything returns to water.” Heraclitus said, “The world is a group of eternal live fires that burn at a certain scale and are extinguished at a certain scale.” Anak Simeni felt that qi is the origin of the world.

But whether the world is fire, water or gas, people begin to believe that natural forces can be grasped by human reason, and rational methods are logic and reasoning.

Among them, the one that is best at debate is the famous Socrates.

From the perspective of the present, the myth of Olympus is quite secular and open. 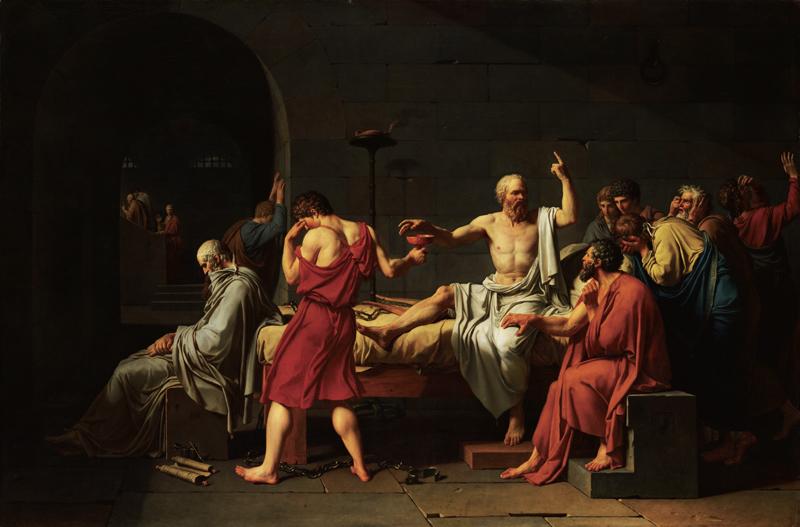 “The Death of Socrates”, Jacques-Louis David, the calmness of the 1787 painting, as always, the philosophical Socrates revered, and the mourning friends around him added the tragic picture.

In “The Republic”, Socrates is really boring.

The guy who is known as the “earliest philosopher” seems to have no business to do, always likes to find someone to chat, and often asks people not to come to Taiwan. Every time he meets a person, he asks: What is justice?

“Helping friends and hurting the enemy is justice.” People answered.

“In case you mistakenly treat a good person as an enemy and a bad person as a friend?” Socrates was not willing, he would ask.

“It is justice to owe money and pay back money,” the second person said.

“In case the other party is a madman, take the money to hurt yourself?” Socrates is still not satisfied.

“Justice is the benefit of the strong.” The third person is arrogant.

Is this not robber logic? !

In the end, Socrates did not get a conclusion on justice.

In repeated questioning and debate, the justice that people often assume is constantly denied and corrected, but justice as the purpose is always the core of Socrates’ questioning.

Socrates is very confused. He just wants to know, what is justice itself? If it is not a stable and constant thing, there is no fixed standard, but only judged from the perspective of habit, then the discussion of the fundamental existence of justice loses its foundation.

This is the classic bridge section of the “Utopia”, which actually brings out the important issues contained in ancient Greek philosophy. However, we are not in a hurry to explain the profound meaning behind the dialogue. To understand ancient Greek philosophy, we can also tell a story about the classic work of the tragic writer Sophocles, Antigone.

King Oedipus of Thebes had two sons who died in the battle for the throne. The new King Creon gave a grand funeral to one of them, and the other exposed the wilderness, let it rot and be eaten by the beasts. . The two prince’s sister, Antigone, believed that this violated the “law of heaven” and that the deceased should be buried. Therefore, regardless of the king’s ban, the brother who was exposed was buried. As a result, he was sentenced to death.

In front of the king, Antigone shouted: “I don’t believe that your order is so powerful and powerful that you can surpass the law that is not written but eternal, because you are just a good man.” Antigone committed suicide.

The usual understanding of justice in the three stories in the previous story, and the position represented by the king in the latter story, can be replaced by a concept: custom.

Similarly, whether it is Socrates’ “justice” or Antigone’s “law of heaven”, it can be replaced by “natural”.

In the context of the ancient Greeks, customs represented traditional rituals and old habits, and nature meant eternal laws, that is, truth.

Therefore, the nature of the time is different from the nature in today’s sense, nor the nature understood by the Chinese. In fact, it has created another tradition, but this is going to be said later.

In the early days of ancient Greek civilization, people believed that obeying traditions and customs was just, and it governed the basic life of human beings. The poet Pinda said that “custom is the king of all things.” However, the ancient Greeks did not stop there. In the Socratic thinking and questioning, they constantly challenged the customs and tortured the traditions with rationality, which eventually led to an important turn of the ancient Greek philosophical spirit.

The ancient Greeks began to believe that there is still eternal truth above real political life. Its existence does not depend on people’s subjective will, but it can be recognized and grasped by human reason, and once it is recognized by human beings, it should be the basic basis of political life. In fact, this is the origin of the concept of natural law in Western civilization and the origin of ancient Greek political philosophy.

In this sense, the ancient Greek spirit is rational and naturalistic. Although ancient Greece has long been dusty as a period of history, it has not been able to continue, but this spiritual trait has been flowing in the blood of Western civilization and has formed a huge gap with Chinese civilization.

Socrates and Confucius
In “The Republic”, Plato built an ideal city-state under the name of Socrates, ruled by the “King of the Philosophers.”

In each part of this “good city state”, Plato has arranged specific political measures for it. The structure of the city-state consists of the philosopher king, the guardian class of gold and silver quality, and the civilian producers of copper and iron quality from top to bottom. Each class has its own position, each recognizes its own life, harmoniously coexists, and jointly maintains the stability of the city-state. Prosperity, confronting foreign aggression and preventing internal unrest. The city-state implements the most primitive “communism” and manages women and children in a “common ownership, unified planning” approach.

In the Socratic thinking and questioning, they constantly challenge the customs and torture the tradition with rationality.

This idea was later criticized by many people who have a liberal lifestyle. But let’s put down our preferences and think of it as a thought experiment of Plato. In this experiment, the model city is an ideal type and a kind of “natural.” Compared with the city-state in the real world, it stands tall and represents a perfect idea.

The oldest surviving copy of the “Utopia” (made in the 9th century), hidden in the National Archives of Paris

Not only does the city state have an ideal type, but for Plato, everything in the world has a perfect concept. Things in reality are just imitations of ideas, all illusory and flawed. Ordinary people grasp things by knowing reality, and the knowledge thus obtained can only be regarded as a kind of “opinion”; only through rational methods and logical thinking to understand ideas can the truth be obtained.

In fact, from here, it also leads to a strong political critique tradition in Western civilization. The ancient Greek naturalistic tradition and the Hebrew religious tradition coincided with each other, and later various natural law theories and social criticism theories. In the “natural” contrast, reality should be criticized and regulated according to its standards. So in the matter of transforming reality, Plato is not the last one of the Western philosophers with strong interest.

Of course, Plato is not the first one. In terms of ideological tendencies, Plato followed his teacher Socrates.

In the era of Socrates’ life, Athens has already passed the golden period of democratic politics. In the past, the boss of the Greek world was being dragged into the abyss by party struggle and internal friction. Socrates’ dissatisfaction with real politics came from this. He believes that justice and virtue are not implied in traditions and customs. On the contrary, they should be the product of rational thinking. Therefore, he does not advocate the elimination of corruption and corruption in real politics by returning to the past, but hopes to create a new political and social norm in accordance with the result of rational thinking to realize the essence of human beings.

At this point, Socrates is completely different from Confucius, who dreams of not being guilty. Looking forward to the Confucian tradition of thought pioneered by the retro Confucius, it has embarked on another path of Chinese naturalism.

Confucius’s lifelong dream is “the reunion ceremony”, and the core of Zhou Li is a family-centered etiquette order.

In the second chapter of the Analects of Confucius, there is a child who says, “I stand and live, and my brother is also a filial piety. Is it the foundation of benevolence?” The filial piety based on parent-child relationship is regarded as the foundation of life, not only the natural harmony of human nature. Emotions must also be used to strengthen the family in order to expand into the entire social order. In this sense, filial piety is not only used as the foundation and backbone of morality, but also the mother of the transformation of other moral and social governance. It has also been used as a cornerstone to build a high-rise building of the entire political body.

Here, the Chinese and Western civilizations are separated on two ways. The former discovers nature and the latter invents nature.