The battle was fought and won; the thunder had died away along the
heights of the Alma; it was all over now—that “hell of blood and
ferocity” was past; and little more remained but to number the dead, and
lay them in their last ghastly homes. The agonies even of the
wounded—that terrible grey acre of Russian wounded—were half forgotten
by the untouched; but many a bright-eyed girl in England far away, and
in that northern land which was to me the dearest half of “sea-walled
Albion,” who was wearing her gay muslins and flowers, would be coming
forth, ere long, in the crape and sable livery of grief; for many a
father and mother’s hope and pride were among the redcoats that lay so
motionless and still along those fatal slopes.

The sun was verging westward, the smoke of the villanous saltpetre hung
like a lurid canopy over the summit of the Kourgané Hill, and that final
scene of slaughter in the Great Redoubt; and now men, who had been
separated in the confusion and hurry of the conflict, were meeting
again, and congratulating each other that they were spared.

We, the small force of cavalry, a thousand sabres and lancers, who had
hitherto been impatient onlookers, now dashed through the river, without
Lord Raglan’s authority; and, though the upsetting of a field-gun, and
the slippery nature of the ford, were the cause of much delay, we
reached the summit of the Kourgané Hill soon after the Highlanders had
swept the foe from it. We had six guns with us, and their fire told
fearfully upon the retreating masses of the Russians, who left mangled
piles of dead in their rear. The battery was divided; one half our
force, led by Lord Cardigan, escorting those on the right, while Lord
Lucan, with the rest, conducted those that were on the left. Our orders
were, also, to glean up cannon, prisoners, and other trophies.

The earl rode in advance with my squadron of lancers. We picked up a
good many prisoners, who sullenly threw down their arms and submitted.
These men were all light infantry, wearing flat forage-caps, and long
grey coats that reached to their ankles.

On this duty we had to traverse a great portion of the field, and its
aspect was harrowing; a day of slaughter was to be followed by a night
of agony.

Here and there were pools of blood, in which the flies were battening,
and from whence the honey-bee and the snow-white butterfly strove in
vain to free their tiny pinions; and on the glacis of the Great Redoubt,
where men of all regiments—but chiefly Welsh Fusiliers—lay blended
together, were bodies to be seen without heads, or legs, or arms, bowels
torn out, brains crushed, blood oozing from eyes, or ears, or
mouths—blood, blood everywhere: for it was there that grape, canister,
and round-shot had bowled through the advancing columns.

Among those ghastly piles lay an ensign of one of our line regiments—a
poor boy, fresh from Eton or Harrow, struck down in his first red coat.
He had a miniature in his hand—a young and beautiful girl, thought I.
But Pitblado handed it to me, and then I saw that it represented a
grey-haired woman, of comely and matronly aspect.

She was his mother, no doubt. Could she have seen him there!

A ball had pierced his chest. He was not quite dead; for when Pitblado
poured some water between his lips, his eyes opened, and he began to
mutter as if speaking to his mother—that his head lay on her breast, and
he heard, in fancy, her replies.

True, in the end, to the first instinct, or first tender impulse of
nature, as, when a little child, he had, under pain or wrong, hid his
weeping face in his mother’s lap, the old spirit came over him; and as
his dying ear seemed to hear that mother’s voice, a holy light shone
over his livid face, and the poor lad died happily.

He must have been shot under his colours, for the standard belt was yet
over his left shoulder.

The roar of battle was gone now, and the bushes where the dead ensign
lay were literally alive with larks, thrushes, and linnets in full song.

Many of the Russian slain had half-bitten cartridges in their open
mouths. Many who were shot in the head lay with their faces on the sod,
and their muskets under them; and when struck in the heart, death was so
instantaneous that all retained the position in which they had been
shot. By their attitudes, we might know the time they had been in
dying.

In one place seven of the Russian 26th—for that number was on their
glazed leather helmets—lay all in a line, with their bayonets at the
charge. All these men had been slain by a shower of grape, and were
shot in the head or breast.

As we rode on we secured many prisoners and several battery guns; all
the cannon were on stocks of wood, painted green, with white crosses on
the breeches and muzzles.

And now we were traversing the Kourgané Hill, where the fine fellows of
our household brigade, in their bright scarlet and black bearskins, were
lying in great numbers, and close by were many of the Black Watch, but
all dead. I reined in my horse, and looked at them earnestly.

The countenances of some seemed as if still in life, so far as
expression went. Some were calm and resigned; some as if in prayer.
Others were fierce and stern; but all were pale and white as the cold
Carrara marble. The evening breeze passed over them; it lifted their
hair and the black plumes in their bonnets. Then the dead seemed as if
about to stir. There they lay, with the blood stiffening on their
tartans. My heart was very full.

In some faces I could read a ghastly and defiant smile, and several were
stretched at length, as if the friends that would ere long be sorrowing
for them in their distant home were about to commit them to their
winding-sheet.

Where our cannon had mauled their retreating cavalry, the horses lay in
close ranks, with their long necks stretched out, and their riders
beneath them, all torn, brained, or disembowelled alike by the iron
storm of grape-shot that had swept through the squadron. In some places
we saw only a red, muddy pulp, composed of flesh and bones, where the
enemy’s brigade of guns had traversed the ground. 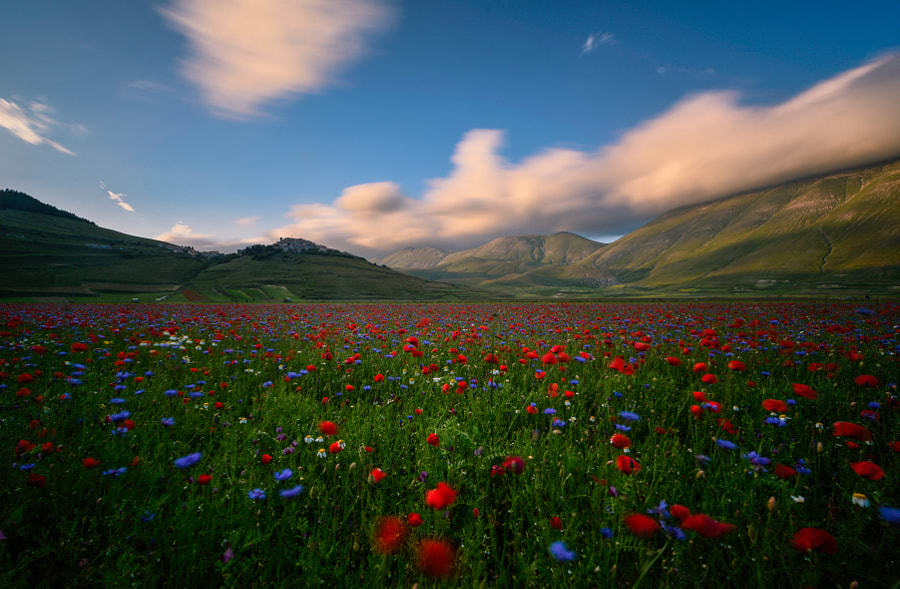 “War!” says a French writer; “those by whose will war comes—those who
make men resemble the savage beasts—will have a fearful account to
render to the righteous Judge above!”

As we passed along with our prisoners, many of our wounded reviled and
execrated them, for on all hands we heard stories of Russian treachery.

Our soldiers, in some instances, when supplying their wounded enemies
with water from their canteens, were shot down by the very wretch whose
thirst they had just quenched. Captain Eddington, of the 95th, was
murdered in this fashion by a Russian rifleman, in sight of the whole
regiment, and of his brother, a lieutenant, who rushed in advance to
avenge him and fell riddled with bullets. Maddened by several such
incidents, our soldiers, with their musket butts, dashed out the brains
of several of the wounded, slaying them like reptiles, and undeserving
of mercy.

Such details are only calculated to weary and revolt; but the stern
scene was not without its brighter features.

Already the surgeons were busy among the wounded, and our gallant seamen
were all tenderness, sympathy, and activity, as they conveyed them on
board the ships, from the rigging of which the events of that exciting
day had been witnessed by thousands.

“Cheer up, sodjer,” I sometimes heard them shout, as they bore a maimed
victim, pale and bloody, to the boats; “we shall all eat our Christmas
duff in Sebastopol.”

Many whom they bore away were “booked” for Chelsea, “the poor soldier’s
last home in the land of the living;” but many were fated to die of
their wounds ere the sun of the morrow lit up the waters of the Euxine.

We were now far in the rear of the original Russian position, and were
actually riding along the Sebastopol road, when Captain Bolton, of the
1st Dragoon Guards, whose sword hand was muffled in a bloody
handkerchief, came galloping after us, to explain that Lord Raglan
desired we should fall back at once.

“His lordship fears that you are going too far in advance,” said he,
“and that the Russian flying artillery may halt and open on you. Give
up all pursuit of prisoners; set loose those you have, and simply escort
the guns.”

On this we halted and liberated more than a hundred prisoners of all
ranks, several being officers. Some of the latter shrugged their
shoulders contemptuously at the commiseration we expressed for some of
the Russian wounded, who lay on the road expiring of weakness and
thirst.

“Bah!” said one, in French, to me; “they are only private
soldiers—peasants—and will soon die.”

His sentiments were worthy of a Russian aristocrat; but he was a grim,
stern, and white-moustached officer, evidently of high rank, for his
breast was covered from epaulette to epaulette with stars, medals, and
crosses.

I had afterwards reason to know that this officer was General Baur, who
had commanded the reconnaisance at Bulganak.

As we were retiring, we came among some of the French, and I recognised
Mademoiselle Sophie, the _vivandière_ whom I had seen at Gallipoli and
Varna, and who immediately offered me a _petit verre_ of cognac from her
little store, which I gladly accepted. She looked pale and excited, and
her eyes were bloodshot.

“Our regiment has suffered heavily to-day, monsieur,” said she. “I was
thrice under fire with it; but so many of my comrades
fell—that—that—_mon Dieu!_ it proved too much for me.”

“_Hélas! mon pauvre Jules!_ he is lying yonder with ever so many more of
ours,” she replied, pointing with her trembling hand to the Telegraph
Battery.

“Dead, monsieur, dead! He fell when planting the standard of the 2nd
Zouaves on the summit, where you may still see it flying. Poor Captain
Victor Baudeuf, who used to flirt so terribly with Rigolboche, and pay
such frightful sums for a _fauteuil_ every night she danced, till
Mademoiselle Theresa took her place at the _cafés chantants_—well, he,
too, and two hundred of our rank and file, are lying there.”

The _vivandière_ wept and wrung her hands.

All great excitements are followed by a painful reaction; and I shall
not readily forget the dreary night that followed the day of the Alma.

My troop bivouacked near the old ruined walls that lie on the western
flank of the Kourgané Hill.

Vast numbers of dead were lying near; they disturbed us not. But the
wounded, the dying—ah, their moans and cries were frightful! I muffled
my head in my cloak, and strove to shut out the piteous-sounds, and
court sleep beside my jaded charger, close to whose side I crept for
warmth.